Images play a key role within today’s capitalism. They are used as a universal language, a tool of persuasion and a vehicle for ideology. They constitute a fundamental element of the virtual reality we are immersed in and the main weapon in the struggle over an arena of strategic importance today – the collective imaginary. However, their interpretation is all but objective. Images are essentially ambiguous. 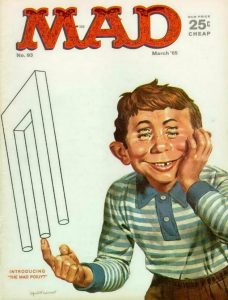 Appeared on the cover of Mad Magazine in 1965, it is a complex and paradoxical figure, which changes according to where the attention of the beholder focuses.
It is an optical illusion which demands reasoning.
The poiuyt hence becomes the symbol of a critical attitude that is essential for a conscious approach towards the power of images.
Such attitude finds some room for expression within the art world. Albeit a niche environment, the latter offers some margins of freedom for activating oppositional strategies towards the homologation and control exercised by the system. To claim such attitude is a political act.

Collective exchange and interaction are at the core of POIUYT, a research network structured as a platform producing dialogue amongst artists, curators, critics and theorists from various fields as well as students, enthusiasts and curious. POIUYT is conceived as a long-term project and will feature a programme of events, including exhibitions, seminars, workshops, talks, in order to develop a direct interaction with the public, the institutions and the territory.
The word poiuyt looks like a typo. However, it is the reversed order of the last six letters of the computer keyboard’s first row. Within the networked culture it is synonym for boredom as much as its antidote – typing it is an attempt to open research paths yet to be explored.